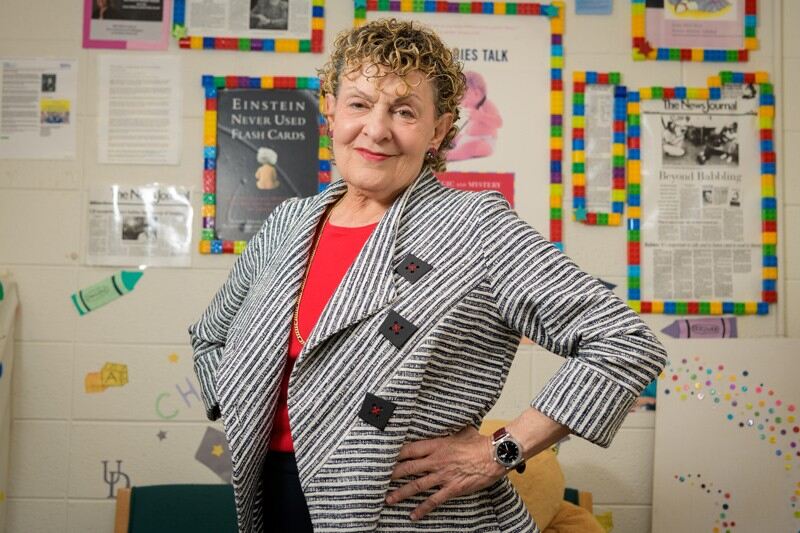 Roberta Michnick Golinkoff, Unidel H. Rodney Sharp Chair and professor in the School of Education (SOE) and in the departments of Psychological and Brain Sciences and Linguistics and Cognitive Science at the University of Delaware, has been elected to membership in the National Academy of Education.

The National Academy of Education advances high quality education research and its use in policy and practice, and its members are elected on the basis of outstanding scholarship related to education. Golinkoff is one of 22 national and international scholars elected to membership this year, and she is the first member from UD to receive this honor.

“This diverse group of scholars is at the forefront of those who are improving the lives of students in the United States and abroad through their outstanding contributions through education scholarship and research,” said Gloria Ladson-Billings, president of the National Academy of Education.

“Becoming a member of the National Academy of Education is one of our field’s highest honors, and is a fitting acknowledgement of Roberta Golinkoff’s decades of groundbreaking contributions to language development, the benefits of playful learning, the effects of media on children, and early spatial development,” said Laura Desimone, director of research in the College of Education and Human Development (CEHD) and professor in the School of Education and the Joseph R. Biden, Jr. School of Public Policy and Administration.

With research partner Kathy Hirsh-Pasek of Temple University, Golinkoff has dedicated her career to foundational research on language, literacy, education, and spatial reasoning in the field of developmental psychology in infants and young children. Her work has been recognized with prestigious awards from several organizations, including the American Educational Research Association, Association for Psychological Science, and the Society for Research in Child Development.

In the late 1980s, Golinkoff and Hirsh-Pasek pioneered an innovative research method for studying preverbal infants named the Intermodal Preferential Looking Paradigm (IPLP). Through the use of side-by-side visual stimuli on a television screen and a single auditory stimulus, researchers were able to determine whether preverbal infants could match what they heard with one of the events they saw on the screen. This method is now used throughout the world to study what young children know about language and how they learn it. At the University of Delaware, Golinkoff established the Child’s Play, Learning, and Development Lab (formerly the Infant Language Project), which continued this line of research and currently explores a range of topics on how children learn and grow.

Golinkoff and Hirsh-Pasek later focused their research on the importance of play in the development of young children, demonstrating that preschoolers often learn best during child-directed free play and guided play with adults. In 2010, Golinkoff and Hirsh-Pasek organized the Ultimate Block Party in New York City’s Central Park and invited families to engage in child-centered activities that illustrated the value of playful learning. Over 50,000 families participated in the event, and subsequent block parties were held in Baltimore and Toronto.

Golinkoff continues to engage the community through hands-on learning events. Through her Playful Learning Landscapes project, Golinkoff works to develop learning environments outside of the traditional classroom given that children only spend 20% of their waking time at school. Golinkoff and Hirsh-Pasek have showcased the science of how the brain works in New York City’s Central Park, transformed supermarkets to heighten caregiver-child interactions, and mounted a life-sized, human game board designed to encourage STEM learning at Philadelphia’s Please Touch Children’s Museum.

Their most recent book, Becoming Brilliant: What Science Tells Us About Raising Successful Children, reached the New York Times best seller list. Golinkoff and Hirsh-Pasek assert that the development of six skills are necessary for children to thrive in a 21st century global workplace, experience personal fulfillment, and become concerned citizens. They argue that adults and organizations need these six skills as well to thrive in a world where robots are becoming increasingly prevalent. Translating scientific evidence into accessible and usable information, Golinkoff and Hirsh-Pasek show how parents and educators can nurture collaboration, communication, content, critical thinking, creative innovation, and confidence in children and in themselves.

“In inviting Roberta into membership, the National Academy of Education has undoubtedly recognized her unceasing curiosity, boundless energy and enthusiasm, and the impressive range of her intellectual gifts. Her contributions span a wide range of substantive topics and the continuum from deep, scholarly articles to popular press to play-filled events to give families access to research-based resources to enhance their children’s development,” said Gary T. Henry, dean of CEHD and professor in the School of Education and the Biden School. “Whether working in her Child’s Play, Learning, and Development Lab at UD or speaking to school superintendents across Delaware or keynoting at a scholarly conference, Roberta speaks science in a way that is attuned to her audience, leaving them informed and motivated to know more and act accordingly. We are proud to have her as a colleague in the School of Education at the University of Delaware.”

Golinkoff will be inducted into the organization with a ceremony at the 2021 National Academy of Education annual meeting in November.

Learn more about Golinkoff’s research and projects on her website, https://roberta-golinkoff.com/

Read the full article in UDaily